Sergei Polunin, the Royal Ballet principal who walked out of Covent Garden last January with the intention of quitting ballet created quite the stir. In follow-up tweets and interviews, Polunin seemed to be done with dancing, a possibility which shocked the dance world.

“The main impact though, was a sense of loss. A dancer like Polunin comes along every two or three decades; to see him demonstrate a movement is to see a blueprint of perfection…Polunin has it in him to be the heir of both stars (Nureyev and Baryshnikov), adding Nureyev’s feral impulse to Baryshnikov’s phenomenal virtuosity and clarity…” says Julia Kavanagh in a recent interview with Polunin.

The Economist’s Intelligent Life section just published a lengthy article about Polunin’s choice on that January day in London. It also discusses where he has landed some eight months later. While he may have given the impression that he had tired of the disciplined life of a ballet dancer, it turns out he needed something very specific. And he found it in Igor Zelensky, the new artistic director of Moscow’s Stanislavsky Theatre.

“(Zelensky) knew I was going to like him, as a father figure. And he was right. That’s what really convinced me. It’s him,” Polunin told Kavanagh. And so he took a contract with the Stanislavsky, where he will dance for the next four years. Kavanagh says that Polunin found in Zelensky a friend and a mentor. “Always what I needed was a person who believed in me. Like a teacher. I don’t need them to say anything. I just need their support,” said Polunin.

That quote seems to sum up what had been missing for him at the Royal and how finding it has brought him back to his passion for dance. I am particularly thrilled that he’s back onstage because watching him dance live is on my bucket list. 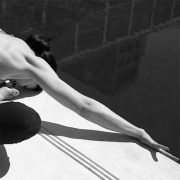